Conservation, as defined by the American Heritage® Science Dictionary, means, "The protection, preservation, management, or restoration of natural environments and the ecological communities that inhabit them. Conservation is generally held to include the management of human use of natural resources for current public benefit and sustainable social and economic utilization."

Conservation is not only important for the health of an ecosystem, but also to sustain resources that humans utilize. It is difficult to see the long-term benefits that conserving a large predator will have on ecosystem health and resource abundance, but past conservation successes highlight exactly why we need to conserve these species.

The case study of wolves in Yellowstone is great for demonstrating the roles that different animals play in their environment. Wolves have always been present in Yellowstone National Park and it wasn’t until they were forcibly removed due to a congressional mandate that they became absent. The last Yellowstone wolves were killed in 1926 and their removal had a variety of effects, both direct and indirect, on the Yellowstone biome (Smith & Bangs, 2009). Upon extirpation of Yellowstone’s wolves, the local elk population erupted, which created an imbalance. Elk would overgraze on various plant species (Woods, 2016), leaving less forage available for beavers, whose populations suffered as a result (Ripple & Beschta, 2012).

Beavers are vital to the Yellowstone’s ecology due to their ability to shape the landscape and their decreased numbers took an effect (Ripple and Beschta, 2012). Upon reintroduction in 1995-96, wolves in Yellowstone began regulating the elk population once again. This led to a dramatic increase of beavers in the ecosystem and restored equilibrium (Ripple & Beschta, 2012). This equilibrium made way for greater biodiversity to be enjoyed by visitors to the park, and it demonstrates why it is important to preserve native predatory species. These predatory species are responsible for maintaining an ecological balance and are a barometer for measuring the health of an ecosystem. Their conservation is vital to upholding a productive environment that can be enjoyed and utilized by humans.

The complex ecological relationships that exist in Yellowstone are also observable in the marine environment. Studies have shown that, similarly to wolves in Yellowstone, top predators in marine ecosystems maintain populations of various species and have important effects on trophic cascades (Bowen, 1997). A 2010 study examined the concern that harbor seals in the Strait of Georgia negatively affect fisheries by competing for commercially harvested Pacific herring. The top predators of Pacific herring are not seals, but Pacific hake, a species also targeted by harbor seals. The hake not only eat the herring, but also compete with them for resources, thereby adding a level of complexity to the regional food web that was not previously well-understood. Even though both fish species are harvested by fisheries, the predation of hake by seals allows the herring population to increase where harbor seals are present. This permits more herring to enter the environment, leading to an increase in fish biomass available for commercial harvest (Li, Ainsworth & Pitcher, 2010). This relationship demonstrated by Li et. al., can be applied to other ecosystems, like the Cape Cod coastal waters.

Today, we are seeing a resurgence of gray seals in northwest Atlantic coastal waters. The abundance of gray seals has become a locally controversial topic, however it is important to note that the presence of healthy populations of top and meso-predators are indicative of an ecosystem’s overall health. The absence of large predators can impact several trophic levels as well as fisheries (Heithaus, Frid, Wirsing & Worm, 2007).

Prior to their extirpation, the role of gray seals in the local ecosystem was not well understood. Gray seals were blamed for declining fish stocks, and bounties were initiated as a way of culling seal numbers, although there is no evidence to support that a cull had any positive effects on fisheries. In fact, studies have shown that removing marine mammals from fisheries does not positively affect fish biomass and can actually cause it to decrease (Morissette, Christensen & Pauly, 2012) (Li et. al., 2010). In 1962, gray seals gained protection in Maine and Massachusetts (Lelli, Harris & Aboueissa, 2009) and then in 1972, they became federally protected under the Marine Mammal Protection Act. Since then, their numbers have been rebounding. Today, with the resurgence of gray seals, scientists are rapidly trying to study their role in the ecosystem in greater depth, which has many implications pointing at why conservation of this species is important.

In multifaceted ecosystems like that shown in Figure 1, it is rare to see the simple predator-prey interactions that serve as textbook examples of how the food web works. The northwest Atlantic is no different, so it is important to look at the direct and indirect impacts of the presence of top predators. It is hypothesized that the failure of cod to recover in the northwest Atlantic is due to an abundance of hake in the area. Hake are commonly eaten by gray seals and therefore, as was the case with harbor seals in the Strait of Georgia (Li et. al., 2010), the presence of healthy gray seal populations could have a positive effect on the restoration of fishery targeted species like cod in Northwest Atlantic waters. The diet of gray seals in Cape Cod’s waters are continuously being evaluated, but it seems that, like other marine mammals, gray seals have a role to play in maintaining healthy fisheries. Their continued conservation will lead to a more stable environment and will therefore benefit humans that depend on this ecosystem. As gray seals continue to fill their historical niche, we will see more clearly how important top predators are to the wellbeing of marine environments.

All animals have a role to play in their ecosystem. Since gray seals have been absent from Cape Cod waters for so long, it is difficult to say what their precise role is. However, as scientists continue to study the gray seals, we are reinforcing why it is necessary to conserve these marine mammals. Conservation takes time and its effects are rarely felt overnight. We need to take time to study the roles of top predators in the marine ecosystem so we can gain a deeper understanding of how their presence may benefit us as well as species that exist within the food web. Successful conservation is the first step towards gaining this understanding. 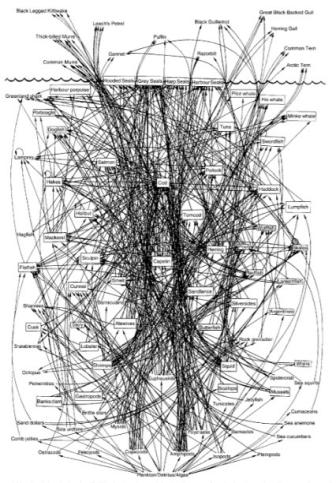 Lavigne, D. M. (2003). Marine mammals and fisheries: the role of science in the culling debate. Marine

Woods, M. (2016). The role of seals in the food webs of Cape Cod beaches. Ecosystems Center,